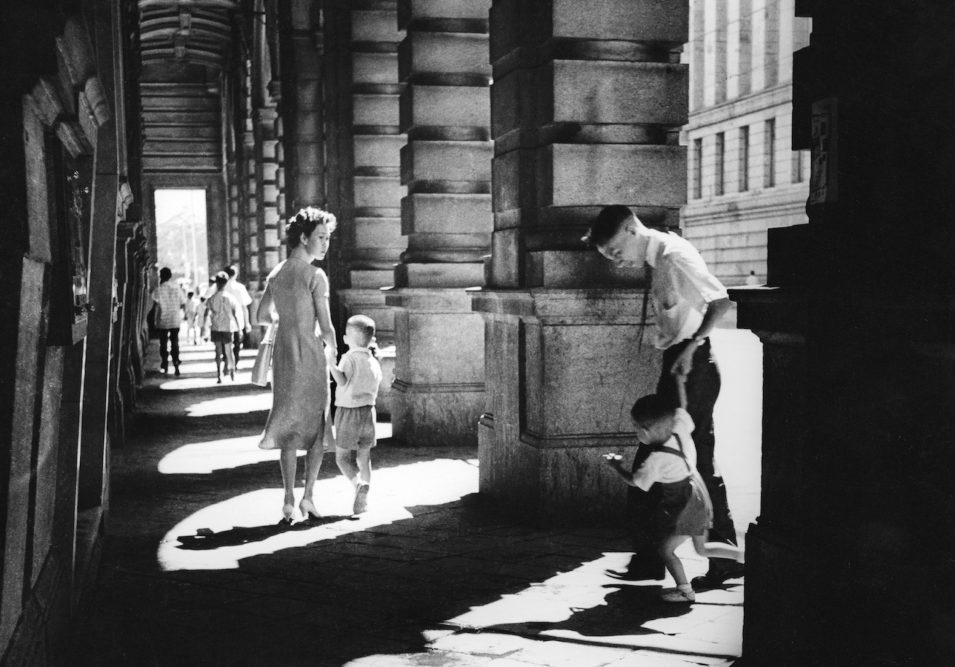 Hong Kong, in the 1950s and 1960s, has an unadorned beauty. There were not many skyscrapers around, and sunlight always left long shadows on the streets and pedestrians. The late photographer James Chung (鍾文略, 1925-2018) once captured that era’s exquisiteness and aesthetic. The exhibition “Long Shadow-James Chung” is like wandering in Hong Kong’s past, immerse yourself in the beautiful light and shadow.

When James Chung came to Hong Kong from Guangdong in 1947, his grandmother gave him two gold bars. According to his eldest son Stanley’s recollection, he exchanged gold bars to work as a movie advertisement apprentice in the theater. He was often exposed to celebrity images, and that spark his interest in photography.

James Chung bought his first camera in 1957. After the store clerk explained the basic knowledge of aperture and shutter, he immediately rushed to the Zoological and Botanical Gardens. He photographed the shiny lotus flower under the sunlight, and it became his iconic work in early times. Unexpectedly, the image is quite exquisite and published in newspapers and magazines. He bought more film and photographic paper with the remuneration to continue his hobby.

As an apprentice of movie poster painter, he often stayed in the cinema, which allowed him to observe the light differently. Sometimes the theater staff raised dust when cleaning, and it looks stunning under the sunlight streaming through the windows.  Although James was new to photography, he has a unique sense of light and shadow. According to Stanley’s recollection, he always has artistic visions. Benefit from his painting and woodcarving experience in his early years. He created his extraordinary skills in photography.

Although living conditions in the 1950s and 1960s were difficult, he still insisted on photographing every day. Sometimes, he pawned the camera to buy photographic paper and then used the prize money from the photography competition to redeem the camera. What made James determined to devote himself to photography was his participation in the newspaper’s Photography Competition in 1958. He went out early to take pictures every day and carry a camera even on duty.

There was a time when his job was to whitewashed a school’s walls. He took pictures of the building in his spare time and later invited his wife and classmate to model inside the school. He captured a triangular pattern from the bottom of the building. The stunning image won a camera in the contest, which significantly strengthened his confidence and continued to improve his photography skills through the competitions.

In 1963, under the introduction of director Li Han-Hsiang, he worked for a film studio. His job was to create movie stills and actors’ portraits, preserving visual memories for many filmmakers. After that, he founded a photo studio in 1968 to engage in the photography and printing business until he retired in 1991. During the most exciting 30 years of his life, photography has been inseparable.